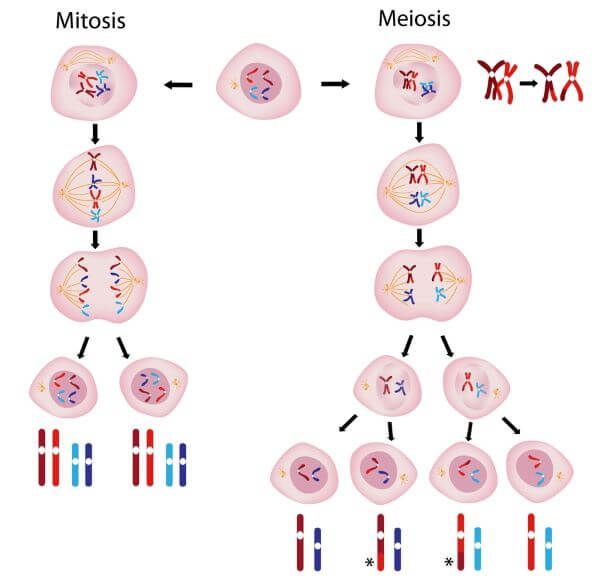 Recognising that cells reproduce via cell division
What do your intestines, the yeast in bread dough, and a developing frog all have in common?
Among other things, they all have cells that carry out mitosis, dividing to produce more cells that are genetically identical to themselves.

Describing mitosis as cell division for growth and repair
Why do these very different organisms and tissues all need mitosis?
Intestinal cells have to be replaced as they wear out; yeast cells need to reproduce to keep their population growing; and a tadpole must make new cells as it grows bigger and more complex.

What is mitosis?
​Mitosis is a type of cell division in which one cell (the mother) divides to produce two new cells (the daughters) that are genetically identical to itself.
(Students to copy this sentence)

In the context of the cell cycle, mitosis is the part of the division process in which the DNA of the cell's nucleus is split into two equal sets of chromosomes.

The great majority of the cell divisions that happen in your body involve mitosis.
During development and growth, mitosis populates an organism’s body with cells, and throughout an organism’s life, it replaces old, worn-out cells with new ones.
(student's copy this sentence)
For single-celled eukaryotes like yeast, mitotic divisions are actually a form of reproduction, adding new individuals to the population.


In all of these cases, the “goal” of mitosis is to make sure that each daughter cell gets a perfect, full set of chromosomes.

​MUTATIONS:
Cells with too few or too many chromosomes usually don’t function well: they may not survive, or they may even cause cancer. So, when cells undergo mitosis, they don’t just divide their DNA at random and toss it into piles for the two daughter cells. Instead, they split up their duplicated chromosomes in a carefully organized series of steps.
​